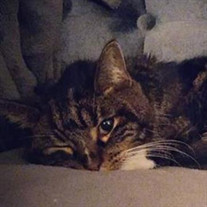 Mr. Boots died peacefully and unexpectedly in the arms of his adoptive father of just over 9 years on Tuesday, October 8th, 2019 at home after a brief battle with illness that overtook him faster than it could be treated. He was estimated to be 13 years old. Boots was adopted by his dad, Justin Hartman September 28th, 2010 along with his brother Rupert in Golden Valley, Minnesota. At first, Boots was reluctant to come home with his dad. He showed this reluctance by climbing to the highest perch of his cat condo at the shelter. When Justin looked up to him arms extended and asked, “Do you want to come home with me?”, he jumped down and into his arms. Mr. B’s tuxedo tortoiseshell coat with little white boots helped to project a sense of formality and he was very astute. From very early on his fascination with the outside world was apparent. Mr. B would often spend his time sitting on the window sills observing the outside world. While not a vocal cat, he would often squeak at you or faintly meow as an unassuming way to get your attention. He was a lover and a very mild-mannered cat. Boots would oftentimes follow the humans of the household and sit nearby, quietly observing. Boots is a proud foster dad, alongside his brother Rupert to two sisters; Elizabeth Taylor & Janet Jackson. Mr. Boots & Rupert fostered these girls from 6 weeks old until their eventual adoption at age 4. A lover of the unknown, some of Boots’ hobbies included window watching, keeping a watchful eye on his humans and daughters, quietly coming to cuddle up with you when you least expected it, and exploring the great outdoors with his “Daddy Too”, Jasen. The quickest way to Mr. B’s heart was to give him gentle scratches one- on- one, and if you were lucky you’d hear a faint purring as a sign that he was happy. Mr. Boots will be greatly missed but by none more so than his daddy, Justin. Boots was there for him through the good times and bad and when nobody else could be. It was a good life and one that his Daddy would do all over again if given the chance. Besides his daddy, Mr. Boots leaves behind a brother, Rupert, daughters Elizabeth and Janet, Daddy Too Jasen, Auntie Natalee and countless friends and acquaintances, both human and furry, he’s made throughout the years. At the wishes of Mr. Boots’ family, give your cat a few extra cuddles, scratches or treats tonight because you never know when they’re going to be ready to cross the rainbow bridge.

Mr. Boots died peacefully and unexpectedly in the arms of his adoptive father of just over 9 years on Tuesday, October 8th, 2019 at home after a brief battle with illness that overtook him faster than it could be treated. He was estimated to... View Obituary & Service Information

The family of Mr. Boots Hartman (Mr. B) created this Life Tributes page to make it easy to share your memories.

Mr. Boots died peacefully and unexpectedly in the arms of his...