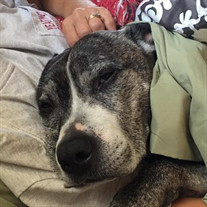 Hendrix made his way through 3-4 homes and several states before ending up with us. It’s no wonder he was such an awesome travel companion. At the time we were asked to rescue Hendrix we were going through cancer treatment with our first Pitbull and could not take another dog. Hendrix’s options were bleak, so we placed Hen in boarding all the while looking for his forever home. Hendrix was not very trusting of people, after being let down so many times, so we took it at his pace. He would sit out under a tree with me as far from me as he could possibly be on the leash. Every couple of days he would take a step closer until he finally solicited attention from me. That was the beginning of an unbreakable bond between he and I. He began declining in the boarding situation and I needed to make decisions quickly. I decided I would pick him up each day for 7-8 hours so he could spend time in our big back yard, sunning himself and playing. He was having none of it. He wanted to be where I was, and since I was mostly in the house working from my computer, we would rotate our pups to make sure Hendrix got what Hendrix needed. I would work at my computer and he would drape the front part of his body over my lap and fall sound asleep for hours in that position. Several weeks into this routine we lost our boy Grendell to cancer and I immediately told my husband I was going to pick up Hendrix permanently. Greg wasn’t on board initially, but I knew from the moment he laid his head in my lap that he was home. He needed me and I needed him. Hendrix chose me to trust and I had to make sure to never take that trust for granted. I wasn’t the best at this in the beginning, always trying to make him into a dog he could never be, but he was patient with me and just waited for me to get IT. Hen did not care for other dogs, so it made it a challenge to manage a multi-dog household, but we made it work and everyone got their time and needs met. Hendrix was always comforting me when I was down or sick. He would never leave my side. He would bury himself under the covers with me, and sleep spooning in the crook of my arm. He was my baby, my travel companion, my comforter, my snuggler, and my protector. He taught me patience, understanding, trust, unconditional love, sensitivity, and most of all acceptance. Acceptance of dogs as individuals with different personalities and needs. He taught me to stop pushing my agenda and just let him be who he was. And what a dog he was. Hen hid his illness for as long as he could and then hung on long enough for me to come to grips with the fact that I could not fix this and that the only thing that I could do was to set him free. I knew he would tell me when he was ready, and he did. My heart is shattered into a million pieces, but I must believe that I will see my beautiful brindle boy again one day, healthy, happy and waiting for me with the ones that have gone before him. I will miss you till my last breath T-T-Bone. Mama loves you.

Hendrix made his way through 3-4 homes and several states before ending up with us. It&#8217;s no wonder he was such an awesome travel companion. At the time we were asked to rescue Hendrix we were going through cancer treatment with our first... View Obituary & Service Information

The family of HENDRIX YEARWOOD created this Life Tributes page to make it easy to share your memories.

Hendrix made his way through 3-4 homes and several states before...