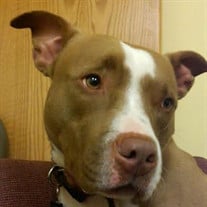 Shamus and his brother Shiloh came to us from Chicago’s Animal Care and Control facility. Pits for Patriots was just getting started, when our founder and treasurer were at the animal control facility pulling small dogs for another dog rescue. While testing dogs for this rescue, they came across Shamus and Shiloh in a pen together. The two were found roaming the streets of Chicago and had already spent 30 days awaiting rescue. They were friendly wiggle butts coming to the cage door for petting and treats. The Pits for Patriots members were sure that the local pit bull rescues would snatch them up and save them. The next day when they returned to rescue more small dogs, they stopped in to check on the two. There were no more wiggle butts. Shiloh and Shamus were lethargic and refusing to get up to come greet them. There was sputum all over the kennel floor and the Pits for Patriots team knew immediately that Shiloh and Shamus had contracted kennel cough, and would need antibiotics to recover. When the staff at CACC were notified of the two pups illness, Pits for Patriots was informed that kennel cough was not able to be treated at the local shelter, due to limited funds and resources. Dogs that ended up getting sick were euthanized, if they were not immediately rescued. Pits for Patriots could not allow these two pups to become another statistic in the overcrowded shelter system so we started the rescue process. We nursed the pups back to health and began working with both dogs. In 2012, Shiloh was paired with to an OIF veteran as a personal therapy/emotional support dog. Shamus did not have the mentality of a working dog. He preferred to go for a run, have some fun, and cuddle on the couch, a perfect companion dog. Finally, in August of 2013 Shamus was placed with a guardian to help him come to terms with the very sudden and unexpected loss of his father. Shamus’ guardian spent three months training with us and Shamus; resulting in a bond between the two before Shamus ever went to live with him. Shamus did what he was supposed to do, he cuddled and nurtured his new guardian out of his depression and became his companion for daily runs, weekly softball games, and nightly television watching. And then, just like that, things changed. Two years later, Shamus’ guardian met a girl and Shamus was no longer the priority in his guardian’s life. He stopped setting Shamus up for success and providing him with the attention and exercise he needed. Eventually things ended up with an ultimatum being given, and I think you can all figure out what happened next. Due to the extremely short notice, and no available fosters, we had to place Shamus into boarding. He became sick, lost weight, and began to despise being in a kennel. We brought Shamus out of boarding and into foster, where he began to thrive once more. Two weeks ago, Shamus suffered an ACL tear that was to require surgical intervention. Surgery was scheduled for September 19, 2016. In the meantime, Shamus met is FOREVER DAD Mike. A military veteran suffering from PTSD and anxiety. They met and there was an instantaneous bond. We were over the moon that Shamus and Mike had found each other. The only thing left to do was to get Shamus through his surgery and recovery, so the two could start their life together. Mike came to visit Shamus for the second time, this past Friday, and Shamus did not leave his side. It reconfirmed the match. Mike stated that he would be there for Shamus every step of the way, coming back to see him immediately after surgery and helping Shamus through his recovery. The entire Pits for Patriots team could not have been happier for both Shamus and Mike. Obviously, Shamus was meant for greater things than we can comprehend, as Saturday afternoon we came in from an outdoor chore, to find Shamus had passed away. Shamus will be missed by all those whose lives he has touched. He is an incredibly handsome, goofy boy that loved to carry his stuffed toys, prancing around like a Tennessee Walker. He was extremely loving and sensitive to the emotions of his human companions. We love and miss you terribly Shamus. Until we meet again, your Pits for Patriots Family.

Shamus and his brother Shiloh came to us from Chicago&#8217;s Animal Care and Control facility. Pits for Patriots was just getting started, when our founder and treasurer were at the animal control facility pulling small dogs for another dog... View Obituary & Service Information

The family of Pits for Patriot's SHAMUS created this Life Tributes page to make it easy to share your memories.

Shamus and his brother Shiloh came to us from Chicago’s Animal...